THE LAKE MADE FROM A GLACIER 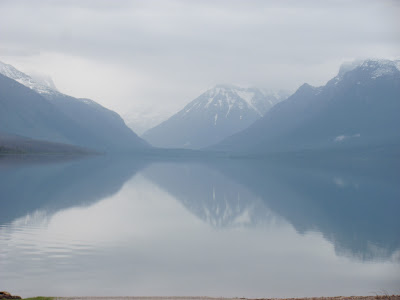 This is Lake Mc Donald seen  from the low end. It is made from snow and clouds and moist air from 12,000 feet and flows to this point in Glacier National Park. It is a wonderfully peaceful place on an early overcast morning before the rain starts and the tourists arrive. I was here for 30 minutes with no company except this solitary loon and the sounds of birds and other ducks and loons unseen. He appeared at the end of his wake and then dove and  I never saw him again.. 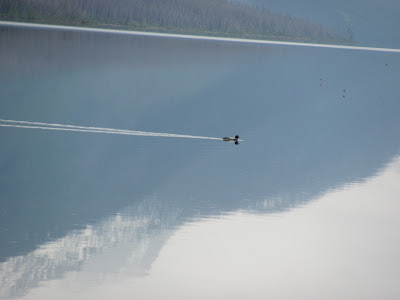 The Road to the Sun is open for the first 18 mikes to a place called Avalanche Point. The crews continue to remove huge amounts of snow from the higher elevations. I was told by the kindly Ranger named Art that I met in the Visitors Center after I came down that it is not unusual and the good news is that the storm that was due this week which would have undone much of the work, it never materialized. I spend some time watching a video of the men doing the removal and looking at the relief map and historical material at the Center. Art is good enough to tell me the pros and cons of the various routes I can take tomorrow when I go  to Canada  to see that side of the this International Peace Park and  maps out the one he thinks is best. Occasionally, "tourists" come by and ask questions. Many have good questions and serious discussions about which campsites and trails are open. One lady demanded to know where she should go to see the "animals." Another man, whose question labeled him a life long city dweller pointed at a road on a map and demanded to know if there were bears there right now. Art handled him and the others graciously. When he saw my smile, he said the best question, and one he hears all summer, is "What time do you let the bears out?" Art has been here 30 years and had it not been time for his lunch I could have listened to his stories of Mountain Goats and Moose all day.

The park is an enchanting place even in the rain, even before they let the bears out and whether you see the animals or not. Some say the Canadian side looks better. I find it hard to believe it can beat this place of clouds and glaciers and rainstorms and mountains in the mist..

Email ThisBlogThis!Share to TwitterShare to FacebookShare to Pinterest
Labels: TRAVEL