FOR THE LOVE OF THE GAME


Major League baseball has moved on to the playoff season now. The dreams of spring are gone for most, the cream has risen to the top, and by the weekend, eight of thirty teams will move forward and the rest will watch on television with the rest of us. There have been zany, remarkable, and memorable moments as there are every year. Perhaps one of the most memorable was that short span in Miami in the sixth inning of a meaningless game on Tuesday October 4th. There, on a night when a last place team was “playing out the string” as ballplayers say, there was this.

On July 9, 2007, Alan Greenberg achieved his dream. He was in the dugout of the Chicago Cubs wearing a major league uniform. Drafted in 2002 by the Cubs be had risen steadily through their minor league organization and had finally reached “The Show.” When Greenberg pinch-hit in the ninth inning against the then Florida Marlins in Miami, he was ready. A left-handed batter, he was asked to hit against Valerio de la Santos, a tall Dominican left-handed relief pitcher who threw his first pitch 92 miles an hour. In a moment their careers as baseball players were changed forever. It hit Alan Greenberg in the back of the head.

He folded up in the batter’s box like a cheap aluminum lawn chair. Thirty seconds after he was announced into his first major league game he was helped from the field thus becoming, along with Fred Van Deusen of the 1955 Phillies, one of two major league players in history to “play” in a game and never take the field.

Last Tuesday night, seven years, two months and twenty-four days later, in the second to last game played by the now Miami Marlins he appeared for a second time. He was sent to the plate to pitch-hit in the sixth inning while playing on a one-day major league contract against the New York Mets. He took a strike, decided he wasn't going to get cheated, and made two mighty swings against the Mets R.H. Dickey who is arguably the best pitcher in the league this year and who throws nothing but a thing called the knuckleball which is a pitch as hard to throw, as it is to hit. The last, an 80 mile an hour floater without much rotation went under the flailing Greenberg’s bat for strike three. 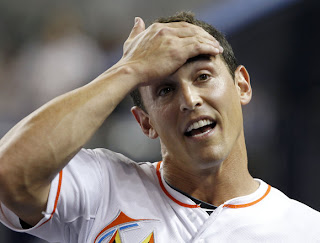 Alan was neither surprised nor defeated by the result. The dimples in his cheeks and the smile on his face might have been even larger when it was over. The standing ovation certainly was. He was elated that at the age of 31 he was wearing a major league uniform again and being given the chance to play in a Major League game.

It was a long road to that moment. After he was hit, he was hospitalized, suffered all the symptoms of post-concussion syndrome: the dizziness, nausea, double vision and he began to understand that perhaps the minor leagues were the best he could ever do after that one stark moment of reality in the big leagues. He kicked around the minors and last played for an affiliated team at the AA level for the Los Angeles Angels in 2008, was released and has played sporadically for Independent League teams since. The last four seasons he has been with the Bridgeport Bluefish of the Atlantic League. This season, in perhaps the most ironic twist of all  they played a game against the Long Island Ducks whose starting pitcher that night was a now over 40 year old lefty named Valerio de Los Santos.

Because Santos was never thought to have tried to hit Greenberg, there was never any personal animus between them although they rarely saw each other after that brief moment on 2007. Thousands of baseballs are thrown very hard every year. Some aren't thrown where they are meant to and they both knew that. Sometimes they are hit over the fence and sometimes they hit people. It’s part of the game. Yet because he was hardly the hero of the piece, little is remembered of him, already a journeyman 38 year old whose career went as far south, albeit in less pain, as Greenberg’s did that July night so long ago. He pitched in only 17 games the rest of the season, played briefly for the Colorado Rockies and the New York Mets thereafter. Santos says it took him six months to get over that moment. He still finds it difficult to pitch to a left-handed batter and still remembers the day with haunting clarity. He knows that over nearly 150 years 18,000 players have come to bat in the Major Leagues and that Alan is the only one whose career ended on the first pitch. He knows that he did that. He needs no reminders. He has no illusions of returning to the big Show now. He is what he is. He pitched only a few more than two hundred innings in his big league career and now part of the drifters who play on as long and wherever they will let them and for little more than their love of the game.

The night that the Bluefish faced the Ducks, Alan Greenberg hit a solid single off Santos in his first at bat, wondering aloud afterward what would have been if that were the result the first time seven years ago. If it was as in that game on a small time field on Long Island this summer, he might have struggled for two weeks and been sent back down, the latest in a long line of Cub “might have beens.” On the other hand, he could have caught fire and played for years. He will never know but it has been long enough now for him to understand it was not the end of his life, only the progression of his dream. For now, he is bathed in light. There are interviews and attention. There is a possible documentary. Of course too, the memory of taking his swings against one of the best pitchers in the game this year in front of his family, more than 100 of his friends, and even Fred Van Deusen of the 1955 Phillies who came from Kentucky to throw out the first pitch and share Alan’s moment.

Does he hope that last Tuesday night will lead to being invited to spring training next year to resume the career that was so unfairly taken from him? He says he does. Will that happen? Probably not. Does that make the effort he made to get back to that moment futile? Not to him. His dream in childhood was to be a major league baseball player. He is. There is no asterisk next to his name in the record books. He was willing to do what it took to reach that goal even if it remains only for one day, one more at bat, one more chance to hear the roar of the crowd in what for him is the greatest show on earth.